BRIEF HISTORICAL SUMMARY: The Dobermann is the only German breed which bears the name of its original breeder, Friedrich Louis Dobermann (02.01.1834 – 09.06.1894). He was believed to be a tax collector, offal abattoir manager (knacker) and a part time dog catcher, legally able to catch all stray dogs. He bred with animals from this reservoir that were particularly sharp. The so called “butcher’s dogs” which were already considered a relatively pure breed at that time, played a most important role in the origination of the Dobermann breed. These dogs were an early type of Rottweiler, mixed with a type of shepherd dog that existed in “Thüringen” as a black dog with rust red markings. Mr Dobermann bred with this mixture of dogs in the Eighteen Seventies. Thus he obtained “his breed”: not only alert, but highly protective working and housedogs. They were often used as guard and police dogs. Their extensive use in police work led to the nickname “Gendarme dog”. They were used in hunting to control large vermin. In these circumstances it was a matter of course that the Dobermann was recognized officially as a Police Dog by the beginning of the 20th century.

The Dobermann breed requires a medium sized, powerful, muscular dog. Despite his substance he shall be elegant and noble, which will be evident in his bodyline. He must be exceptionally suitable as a companion, protection and working dog and also as a family dog.

GENERAL APPEARANCE: The Dobermann is of medium size, strong and muscularly built. Through the elegant lines of its body, its proud stature, and its expression of determination, it conforms to the ideal picture of dog.

IMPORTANT PROPORTIONS: The body of the Dobermann appears to be almost square, particularly in males. The length of the body measured from the tip of breast to the point of the buttock shall not be more than 5% longer than the height from the withers to the ground in males, and 10% in females.

BEHAVIOUR / TEMPERAMENT: The disposition of the Dobermann is friendly and calm; very devoted to the family. Medium temperament and medium sharpness (alertness) is desired. A medium threshold of irritation is required with a good contact to the owner. Easy to train, the Dobermann enjoys working, and shall have good working ability, courage and hardness. The particular values of self-confidence and intrepidness are required, and also adaptability and attention to fit the social environment.

CRANIAL REGION: Strong and in proportion to the body. Seen from the top the head is shaped in the form of a blunt wedge. Viewed form the front the crown line shall be almost level and not dropping off to the ears. The muzzle line extends almost straight to the top line of the skull that falls, gently rounded, into the neckline. The superciliary ridge is well developed without protruding. The forehead furrow is still visible. The occiput shall not be conspicuous. Seen from the front and the top the sides of the head must not bulge. The slight bulge between the rear of the upper jawbone and the cheekbone shall be in harmony with the total length of the head. The head muscles shall be well developed.

Stop: Shall be slight but visibly developed.

Muzzle: The muzzle must be in the right proportion with the upper head and must be strongly developed. The muzzle shall have depth. The mouth opening shall be wide, reaching to the molars. A good muzzle width must also be present on the upper and lower incisor area.

Lips: They shall be tight and lie close to the jaw that will ensure a tight closure of the mouth. The pigment of the gum to be dark; in brown dogs a corresponding lighter shade.

Ears: The ears, are left natural and of an appropriate size; they are set on either side at the highest point of the skull and are ideally lying close to the cheeks.

NECK: The neck must have a good length and be in proportion to the body and the head. It is dry and muscular. Its outline rises gradually and is softly curved. Its carriage is upright and shows much nobility.

Withers: Shall be pronounced in height and length, especially in males and thereby determine the slope of the topline from the withers to the croup.

Back: Short and firm, of good width and well muscled.

Loin: Of good width and well muscled. The female can be slightly longer in loin because of the required space for suckling offspring.

Croup: It shall fall slightly, hardly perceptible from sacrum to the root of the tail, and appears well rounded, being neither straight nor noticeably sloping, of good width and well muscled.

Chest: Length and depth of chest must be in the right proportion to the body length. The depth with slightly arched ribs should be approximately 50% the height of the dog at the withers. The chest has got a good width with especially well developed forechest.

Underline and belly: From the bottom of the breastbone to the pelvis the underline is noticeably tucked up.

TAIL: The tail is left natural and is ideally carried high in a slight curve.

General appearance: The front legs as seen from all sides are almost straight, vertical to the ground and strongly developed.

Shoulder: The shoulder-blade lies close against the chest, and both sides of the shoulder-blade edge are well muscled and reach over the top of the thoracic vertebra, slanting as much as possible and well set back. The angle to the horizontal is approximately 50%.

Elbow: Close in, not turned out.

Forearm: Strong and straight. Well muscled. Length in harmony with the whole body.

Metacarpus (Pastern): Bones strong. Straight seen from the front. Seen from the side, only slightly sloping.

Forefeet: The feet are short and tight. The toes are arched towards the top (cat like). Nails short black.

General appearance: Seen from the rear the Dobermann looks, because of his well-developed pelvic muscles in hips and croup, wide and rounded off. The muscles running from the pelvic towards the thigh and lower thigh result in good width development, as well as in the thigh area, in the knee joint area and at the lower thigh. The strong hind legs are straight and stand parallel.

Stifle (Knee): The knee joint is strong and is formed by the thigh and lower thigh as well as the kneecap.

Lower thigh: Medium length and in harmony with the total length of the hindquarter.

Hock joint: Medium strength and parallel. The lower thigh is joined to the metatarsal at the hock joint.

Metatarsus (Rear pastern): It is short and stands vertical to the ground.

Hind feet: Like the forefeet, the toes of the hind feet are short, arched and closed. Nails short, black.

GAIT / MOVEMENT: The gait is of special importance to both the working ability as well as the exterior appearance. The gait is elastic, elegant, agile, free and ground covering. The forelegs reach out as far as possible. The hindquarter gives far-reaching and necessary elastic drive. The foreleg of one side and the hind leg of the other side move forward at the same time. There should be good stability of the back, the ligaments and the joints.

SKIN: The skin fits closely all over and have good pigmentation.

Hair: The hair is short, hard and dense. It lies tight and smooth and is equally distributed over the whole surface. Undercoat is not allowed.

Colour: The Dobermann is bred in two colour varieties: black or brown with rust red, clearly defined and clear markings (tan markings). Tan markings are on the muzzle as a spot on the cheeks and the top of the eyebrow; on the throat; two spots on the forechest; on the metacarpus, metatarsus and feet; on the inner side of the hind thigh; on the forearms and under the tail.

Height at the withers:

FAULTS: Any departure from the foregoing points should be considered a fault and the seriousness with which the fault should be regarded should be in exact proportion to its degree and its effect upon the health and welfare of the dog and its ability to perform its traditional work.

The latest amendments are in bold characters. 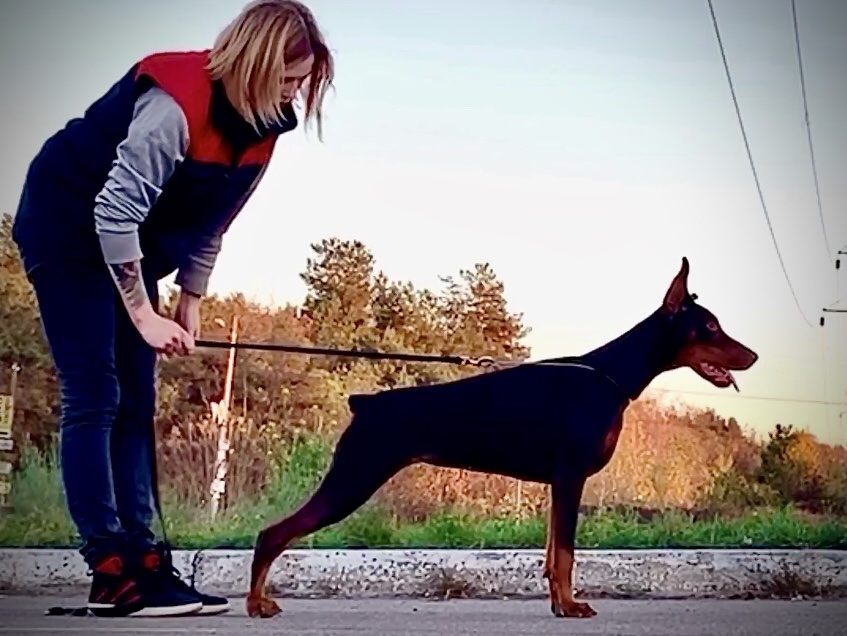 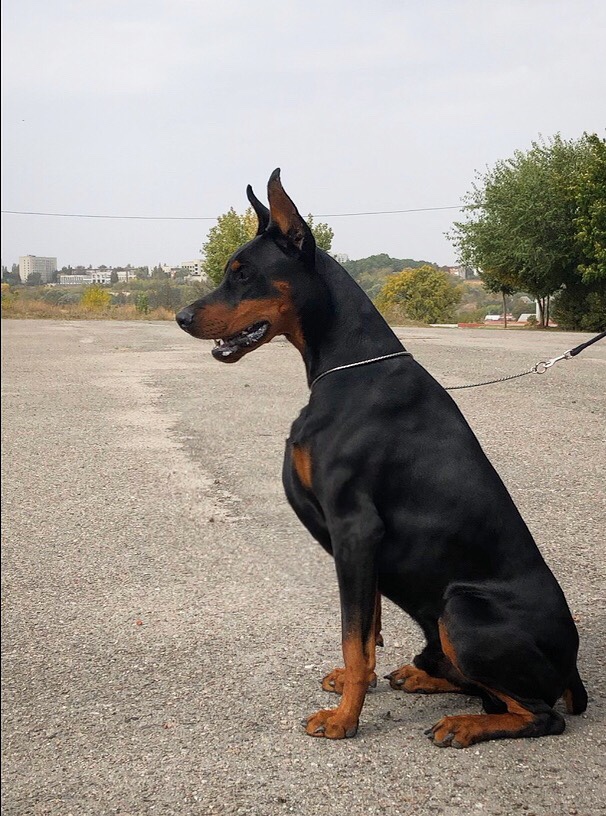 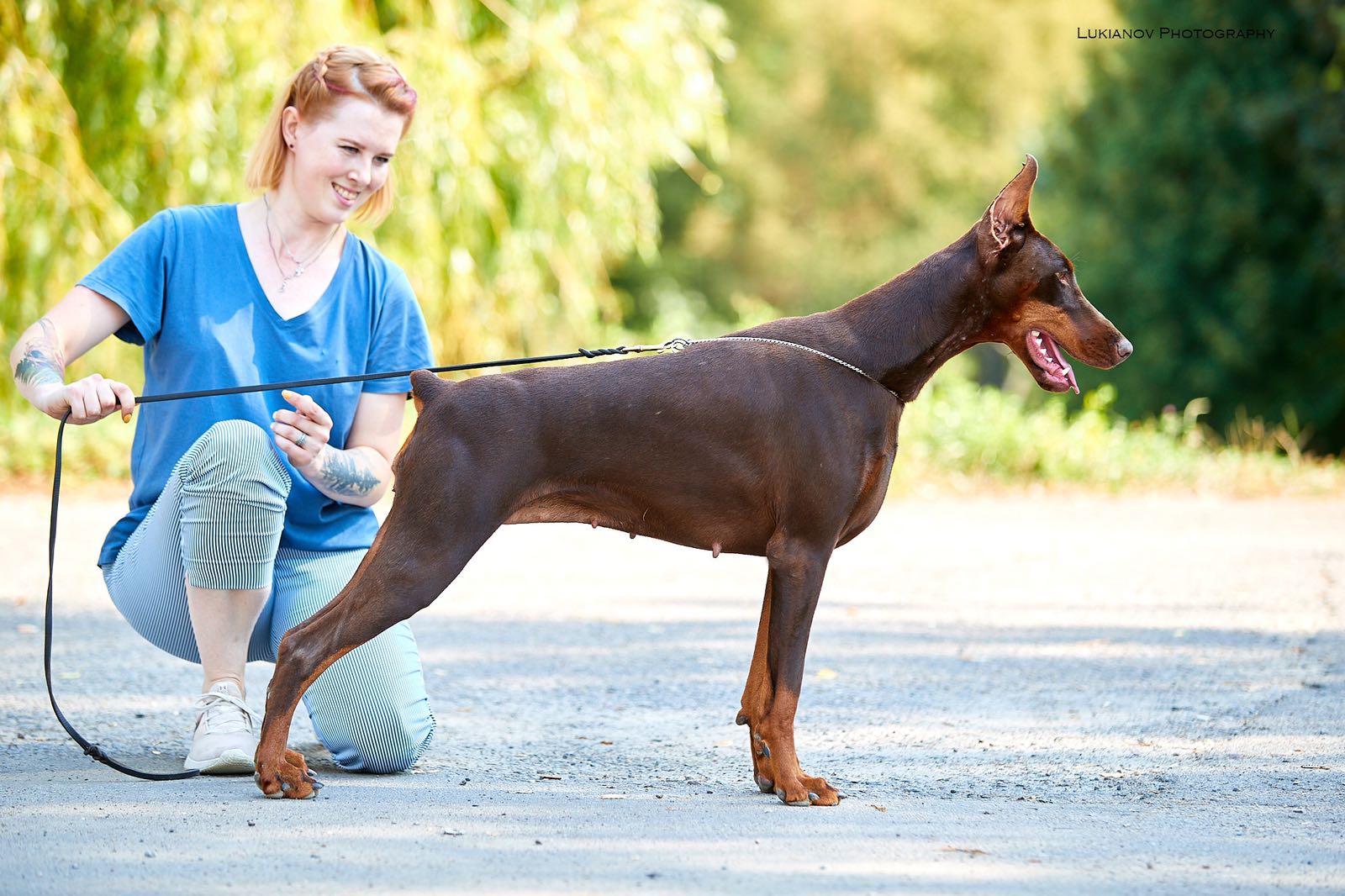 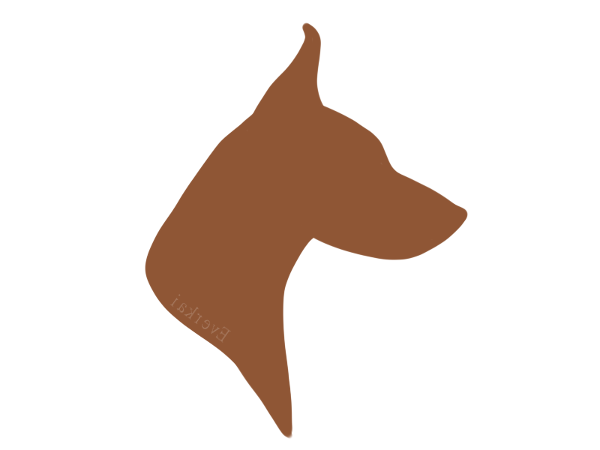 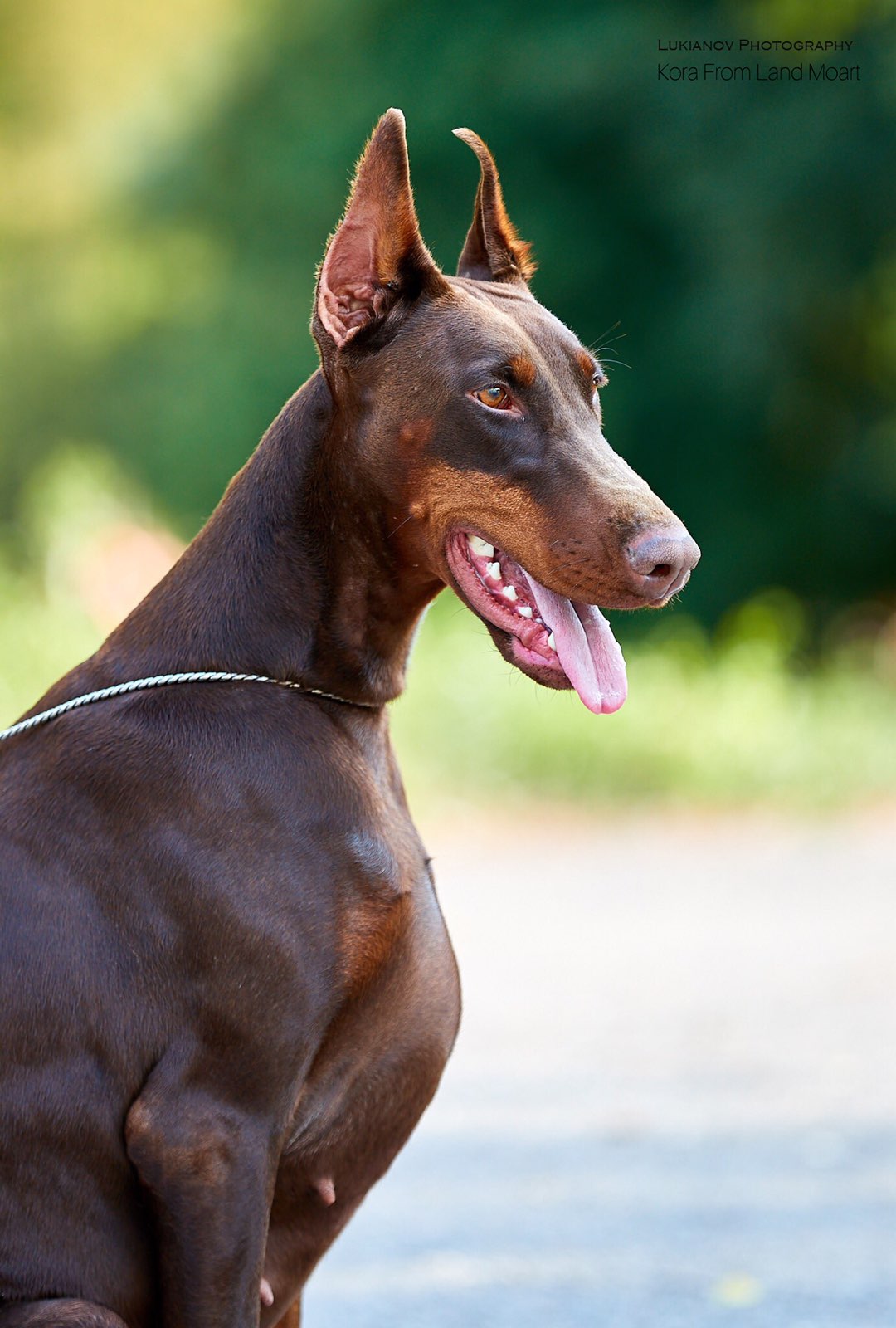